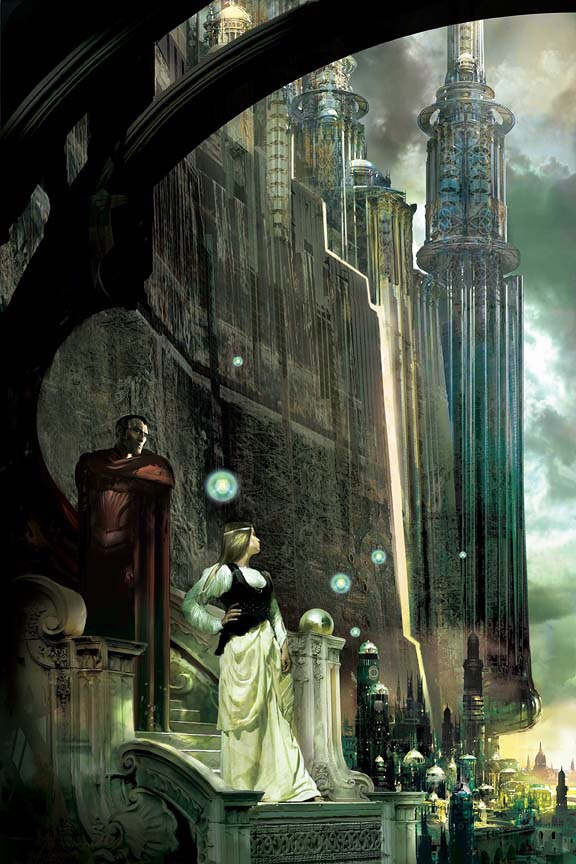 Elantris was the capital of Arelon: gigantic, beautiful, literally radiant, filled with benevolent beings who used their powerful magical abilities for the benefit of all. Yet each of these demigods was once an ordinary person until touched by the mysterious transforming power of the Shaod. Ten years ago, without warning, the magic failed. Elantrians became wizened, leper-like, powerless creatures, and Elantris itself dark, filthy, and crumbling.

Arelon’s new capital, Kae, crouches in the shadow of Elantris. Princess Sarene of Teod arrives for a marriage of state with Crown Prince Raoden, hoping — based on their correspondence — to also find love. She finds instead that Raoden has died and she is considered his widow. Both Teod and Arelon are under threat as the last remaining holdouts against the imperial ambitions of the ruthless religious fanatics of Fjordell. So Sarene decides to use her new status to counter the machinations of Hrathen, a Fjordell high priest who has come to Kae to convert Arelon and claim it for his emperor and his god.

But neither Sarene nor Hrathen suspect the truth about Prince Raoden. Stricken by the same curse that ruined Elantris, Raoden was secretly exiled by his father to the dark city. His struggle to help the wretches trapped there begins a series of events that will bring hope to Arelon, and perhaps reveal the secret of Elantris itself.

A rare epic fantasy that doesn’t recycle the classics and that is a complete and satisfying story in one volume, Elantris is fleet and fun, full of surprises and characters to care about. It’s also the wonderful debut of a welcome new star in the constellation of fantasy.

There were mixed feelings behind my reading of Elantris. If you’ve seen any of my posts, then you know by now that I have loved every Sanderson book that I’ve ever read… but this one did not grip me in the same way. Part of this could be contributed to how I have been reading his works in a backwards order, as one of the things that irked me early on was how some of the characters in Elantris appear to be so similar to other characters in Sanderson’s later works. I see the same character traits used in what feels like every female/male protagonist. Not that those traits bother me that much, it just messes up my inner picture of that character by mixing two together. I started reading this during the past summer, and have only just finished it in November. It look much longer for me than usual to get a novel, but I finished strong with the graphic audio version of this book.

This is the first graphic audio audiobook that I’ve tried (That I got from the humble bundle a while back) and it was super cool! I enjoyed the full cast and sound effects that comes with the “movie in your mind” version of audiobooks. I’m looking at checking out some of the other Sanderson ones that they have. (This sounds like an ad for them at this point…)

Magic systems are something that I’ve never seen Sanderson fail at, and his works can usually be defined by the magic system that accompinies the story. The magic system in Elantris feels as though it could have more depth in the beginning, but the mystery behind it shows more than what appears at first glance. As the story progresses some of the mystery gets revealed, little by little, in a satisfying way. Once you get to the end you learn just how expansive the magic system is, and how it is interconnected with the story’s universe. You can see just how many Aons Raoden was practicing, and you know that there must be an Aon for everything.

The other thing that Sanderson is always know for, is the last 10% of his novels. Evey ending is always so satifisying and fast paced so it brings you immediate closure and more. If it was a bit of a struggle getting through the first 40%, that last sprint always makes up for it. The best bit is that he wraps everything up, but still leaves even more mystery right at the end. You want keep going as soon as it finishes. That’s the magic that reading hooks me with – wanting to stay in the world and the bittersweet feel of completition.

If you like Sanderson/Fantasy, I would check this out. The start feels slow to me, but the journey is worth it. Shoutout to Hrathen for being an interesting character with plenty of depth as well!

Do not dash if you only have the strength to walk, and do not waste your time pushing on the walls that will not give. More importantly, don’t shove where a pat would be sufficient.