In reality, Hiro Protagonist delivers pizza for Uncle Enzo’s CosoNostra Pizza Inc., but in the Metaverse he’s a warrior prince. Plunging headlong into the enigma of a new computer virus that’s striking down hackers everywhere, he races along the neon-lit streets on a search-and-destroy mission for the shadowy virtual villain threatening to bring about infocalypse. Snow Crash is a mind-altering romp through a future America so bizarre, so outrageous…you’ll recognize it immediately. – Goodreads Synopsis

Before we get started, let’s put on some of that synthwave baby.

Am I Being Cyber Punked?

that’s gotta be a joke. Wait… am I the butt of the joke here? That’s his name? Hiro is delivering pizzas all decked out in some futuristic armor with a katana to boot. It’s a high action car chase filled with explosiveness!

It’s around this point where I think to myself “OK – What the hell am I reading? Is this guy just living out some fantasy in his mind during his boring pizza delivery job?” That is really what I thought for the entire time I read this novel. I was waiting for something to be revealed that would make sense of this ridiculousness. The owner of the pizza place is an Italian Mobster? (Whaaaaat?) Neal Stephenson has got to be screwing with me right now. Spoiler alert – I still don’t know if I was tricked or not. I’ve never experience Cyberpunk reading before…but you know what? It felt good.

(Are you still listening to that synthwave? Good.) 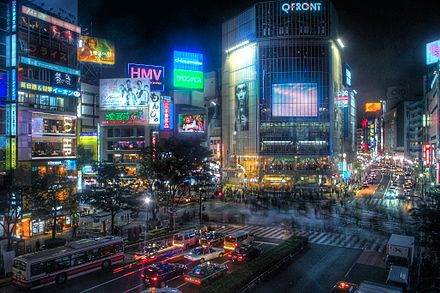 It’s rough, it’s gritty, it’s underground. There are people living in slums jacking into online virtual reality worlds, and people going to industrial park concerts. You got skateboarders and motorcyclists. You got a dark cityscape lit up by neon lights. You got punk baby.

I love how the punkness turns humorous as well. Sometimes this book just goes so over the top with it, that I ended up laughing. The government employees that work for the FBI have to get polygraph tested all the time, they get timed when they read memos to make sure they read them, and all of this other over-the-top futuristic absurdness that feels like satire at it’s high moments. It is very enjoyable to a punk like me.

Fitting with the futurism punk, comes some thoughts about religion. Neal Stephenson again shows that he does his research when it comes to what he is writing about. There are major plot lines of the story that are tied to old religious mythologies, with the Sumerian myths in the spotlight. I have never learned so much about Sumerian mythology (Well maybe in school a long time ago…but who remembers that…) while reading a novel. I love when something I am reading inspires me to learn more. I was on wikipedia half of the time looking up to verify if what I was reading was actually based in truth or not. (It was.)

Now I feel if my Grandmother had read some of these parts, she would have been appalled. There are some hints that religion was created sort of like a computer virus to control people. That’s some atheistic cyberpunk right there. My grandmother would have looked at that the same way she looked at me when I was reading The Da Vinci Code for pleasure. Be warned it may offend some people. (So check out this quote below!)

“Ninety-nine percent of everything that goes on in most Christian churches has nothing whatsoever to do with the actual religion. Intelligent people all notice this sooner or later, and they conclude that the entire one hundred percent is bullshit, which is why atheism is connected with being intelligent in people’s minds.”

Should I Read It?

Do you like virtual sword fights? Then hell yeah you should check it out. It was a fun read, and although not the greatest thing I’ve ever read, I still really enjoyed it. I was originally recommended this novel Snow Crash, after all the hype that I gave Ready Player One. I can see the similarities outside of the virtual world, but that is about it. If you have heard the same thing, I would go in expecting something quite a bit different.

You know I don’t really like to spoil to much or go on about what the plot really is about. That’s what the synopsis is for. Rest-assured though, through all the satire and punk there is a plot that will keep you turning the pages. The Deliverator is one cool punk.

“The Deliverator belongs to an elite order, a hallow subcategory. He’s got esprit up to here. Right now, he is preparing to carry out his third mission of the night. His uniform is black as activated charcoal, filtering the very light out of the air. A bullet will bounce off its arachnofiber weave like a wren hitting a patio door, but excess perspiration wafts through it like a breeze through a freshly napalmed forest. Where his body has bony extremities, the suit has sintered armorgel: feels like gritty jello, protects like a stack of telephone books.”